U.S. lags far behind in pre-school

The United States is lagging far behind much of the developed world when it comes to enrolling children in preschool programs.

The U.S. ranks 24th and 26th among Organisation for Economic Cooperation and Development (OECD) countries in the enrollment and three- and four-year-olds, respectively, reports the Center for American Progress, a liberal think tank:

While the U.S. enrolls just just 69 percent of its four-year-olds and 51 percent of its three-year-olds, other countries enroll nearly all of their young children in preschool programs.

But it isn’t just enrollment where America falls behind — it also fails to keep up in other areas, such as when children begin school, how much it spends on preschool, and the teacher-to-child ratio in its early childhood education programs.

The gap between the U.S. and other countries leads to gaps in achievement later on in childrens’ lives:

Japan, for instance, enrolls nearly all of its four-year-olds in preschool programs and outscored the U.S. by 40 points on the latest international test of fourth-grade math, CAP notes.

But the U.S. isn’t just lagging behind countries it traditionally competes with. Emerging industrialized countries are also setting loftier goals and standards for the enrollment of children in public preschool programs, while the U.S. hasn’t followed the same path: 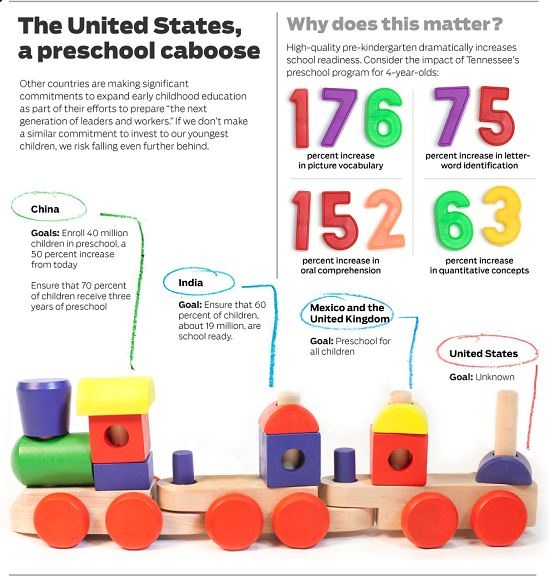 Here are more details about pre-school in America and the Obama Administration’s $75 billion proposal to boost enrollments.

We at Innovations for Learning believe fervently in the importance of early education. We are impelled by the knowledge that too many children are starting school without the necessary foundations.

We’re working hard to bring our TeacherMate® and TutorMate® programs to school districts across America in hopes that every child can learn to read in the primary grades.Because we want to give every child the chance to succeed later on.

— Infographics from Center for American Progress